As part of our aim to establish strong links between school, parents and pupils, this section includes information about the curriculum we teach at St. Cuthbert’s. 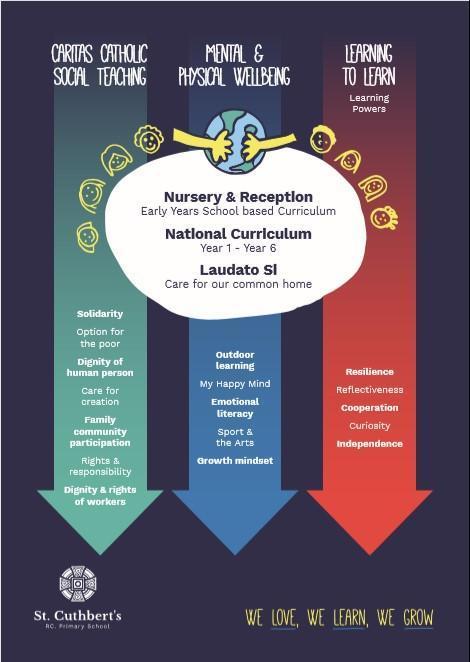 To all our pupils,

Every day at St Cuthbert’s, the staff and governors are working to make sure that by the time you leave us:

Phonics and Reading In The Early Years and KS1

Teaching and Learning of Reading

At St Cuthbert'’s we strive to foster a love of reading at school and at home. At school we teach your child to read through systematic, daily phonics lessons and through Guided Reading sessions where strategies for reading are explicitly taught.

Reading daily at home provides your child with an opportunity to practice the skills that they have been learning.

The books that your child will bring home to practice reading will be at an easier level than the books that they have read during the Guided Reading session. Reading an easier book means your child can use all their reading strategies more readily and will see themselves as a successful, active reader.

We aim for your child to be a successful reader by 6 years of age and for them to leave St Cuthbert’s as competent, fluent readers who read for pleasure on a regular basis. Your role in this is vital.

You will find a download at the bottom of this page which suggests books and authors that they should enjoy at different age groups within school.

You will most likely find the books on the list in your local library. Local charity shops are also a great place to pick up cheap, quality books.

We have also created a list of favourite reads suggested by parents and grandparents of children in school.

Should you need any support with helping your child to read please don’t hesitate to contact the school.

"The more that you read, the more things you will know. The more you learn, the more places you'll go." Dr. Seuss I Can Read With My Eyes Shut!

We have put together some suggested reading lists for you and your child to work through. If you have any other suggestions to add please email them into the School Office admin@st-cuthberts.manchester.sch.uk

Guess How Much I Love You     Sam McBratney and Garth Williams

Where the Wild Things Are        Maurice Sendak

There was an Old Lady who Swallowed a Fly       Pam Adams

The Elephant and the Bad Baby       Elfrida Vipont & Raymond Briggs

I Will Never Eat a Tomato       Lauren Child

Once Their Were Giants          Martin Waddell and Penny Dale

A Squash and a Squeeze      Julia Donaldson

The Cat Who Lost His Purr Michelle Coxon

No Tights for George      Julia Crebbin

Danny The Champion of the World      Roald Dahl

Return of the Hundred Mile an Hour Dog         Jeremy Strong

The Naughtiest Girl in the School          Enid Blyton

The Indian in the Cupboard         Lynne Reid Banks

It Was A Dark and Stormy Night       Allan Ahlberg

Emil and the Detectives       Erich Kastner

How to Train your Dragon      Series Cressida Cowell

All Alone on a Wide, Wide Sea       Michael Morpurgo

The Wind in the Willows       Kenneth Grahame

The Other Side of Truth         Beverley Naidoo